Ena and the Red Check Racer

Ena and the Red Check Racer is a true story of yet another bird who graced our home with his presence. 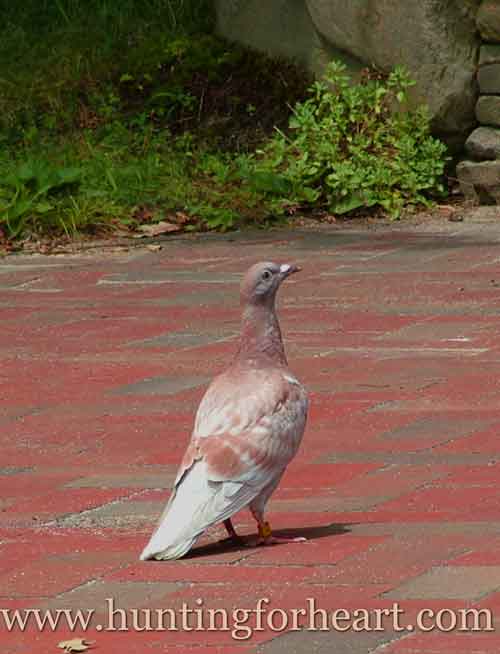 We called him 'Houdini.' He had a tendency to disappear, then reappear - with no clue as to where he went or when he would return.

The Summer after the extended visit from the White Dove, yet another bird showed up at our home. Perhaps because our house is situated on a warm, south-facing hillside, with good elevation and visibility, it appeared to these birds as an accessible and safe landing spot.

One late afternoon, Chuck comes in from outside announcing, 'There's a pigeon sitting on the rocks in the backyard.' We step out the back door. Sure enough, on a stone outcropping behind the house is a beautiful red-check Racing Homing Pigeon. 'Red-check' refers to the beautiful pattern of red and grey over shoulders and wings.

A pigeon-fancier years ago, I still have an eye for these birds. The Red Check Racer clearly is a thoroughbred, with noble demeanor and powerful, streamlined, well-conditioned physique. Purple iridescence shimmers on his dusty red-brown neck plumage.

I notice a band around one leg. I figure this bird has a career as a Racing Homer. He looks a bit weary and disoriented. It is likely he got lost during a race.

I bring out some dry grains and beans in a dish, plus a pan of water, placing them on the lawn about fifteen feet away from where the pigeon sits on the rock. He ambles over to nibble some food and take a long drink.

Chuck and I observe the bird from the brick terrace just below the lawn. He casually walks down the grassy slope and hops onto the patio. At first, he keeps about ten feet between us.

After perhaps twenty minutes, he begins following Chuck and me around the terrace. Soon, he pursues our moving feet - pecking at our ankles and toes in a brazen manner. It hurts enough to make us move away from him! His boldness surprises me, as he seemed inclined to keep his distance at first.

I bring the camera out and take a few photos of him. The sun brings out shimmering pink and green iridescence on his dusty-red neck feathers. He stands confidently, with stalwart attitude.

The pigeon now makes himself quite at home, sitting on the low stone wall or foraging in the grass. He is not inclined to come to my hand for food or sit on my arm as the White Dove had done. But clearly he seems inclined to stay.

I go inside for awhile. When I come out again, there he is, sitting on the low stone wall. He fluffs his feathers contentedly and grooms himself. Dusk is approaching. Seeing him settle in so carefree a manner in a spot that would make him easy prey for a fox or other predator, I decide to see how I can keep him safe overnight.

I bring out a roomy molded plastic dog crate, and line the floor of it with clean straw from a bale of mulch. Opening the wire door, I put a bowl of food in for him. Perhaps he will find the food and go in of his own accord. The crate is well-ventilated; he will have plenty of fresh air and be safe once I latch the door.

The Red Check Racer does not move from his spot on the wall. It is getting close to twilight. I figure he is now hesitant to move about as darkness falls. It looks like I need to be proactive about getting him in the crate.

I slowly move toward the wall, doing my best not to spook him. Gently, I sit down six feet away from him. Every few minutes, I slowly inch closer to him on the wall, until I am within easy reach. Next, I subtly slide my hand closer until almost touching, then give him time to adjust.

I know if I scare him into moving, this beautiful bird will be in significant danger. We sit together, not moving, as dusk turns to deep turquoise blue twilight. I have to make my move soon.

Slowly, I turn to face him, moving a bit closer. I wll need to use both hands. I let him see where my hands are at all times; no surprises.

With my right hand open, I slowly place it over his shoulders to restrain his wings, then cradle him underneath with my left hand, his feet hanging between index and middle finger, my thumb over his wing tips. His silky body cradled gently, he does not struggle. This is the classic way that pigeon fanciers hold a bird.

I carry him to the dog crate, kneel, and place him deep inside on the soft straw bed. Closing the door gently but promptly, I sigh in relief. Now he is safe for the night.

Next morning, I bring pans with water and food out to the terrace, then open the door of the crate to let the pigeon out. He walks about as though this has always been his home. I hang out with him for awhile. He stays near, but does not come directly to me.

That evening, bird goes into the crate on his own as dusk turns to twilight. I close the door. He is content, fluffing out his feathers and settling down.

Bird Makes Himself More at Home

As the morning sun warms the bricks, I wheel out the chaise lounge and place the cushion on top. Bird decides the sheltered space under the chair is perfect as a pigeon coop. As I take some sun, he relaxes below.

After a few days, it becomes apparent that our bird friend considers the chaise lounge to be his possession. If I move it, he follows, ducks under it, and perches on the crossbar at one end.

The sun may beat down on the bricks, but he has his shady, protected perch. Often, when I come out the back door, I find him under the chaise. By the number of bird poops on the bricks beneath him, I can tell he's been there awhile.

Too many bird poops under the chaise lounge becomes a little problem. I don't mind him enjoying its shelter for awhile, but just don't want a big pile of poop in one spot on the bricks. I wheel the chaise to another spot, and turn it on its side. That way, maybe bird will look for shade somewhere else.

No deal! Even with the chaise on its side, it is clear he has decided it belongs to him! He uses the lower leg of the chaise as a perch, cozying up to the slats (now vertical) which support the cushion, cocks his head and looks at me out of one eye. Clearly, he derives a sense of security from the shelter of our favorite piece of outdoor furniture!

Occasionally, bird struts about on the terrace, drinks or takes a bath in the water bowl, nibbles some grain. One day, I see a shadow pass over the bricks. Looking up, I see a red-tailed hawk. The pigeon is already scuttling toward the forests edge, obscuring the hawk's view of him by hiding in low growth under big shade trees. Apparently, he is more savvy than I thought.

For a week or so, I do not let Ena out onto the terrace. But she loves to lie in the shade nearby while I am on the chaise lounge. I decide to see if I can get her in harmony with the pigeon, so that we can all relax out there together.

I set up the chaise lounge near the back door. Bird struts about the terrace in the sun, about fifteen feet away.

With a pouch of treats around my waist, I bring Ena out on a six foot lead. She alerts, showing great interest in the pigeon. I cluck to her and she pushes toward me for a treat. After doing this a few times, I sit down on the chaise and tell Ena to lie down, giving her another treat. 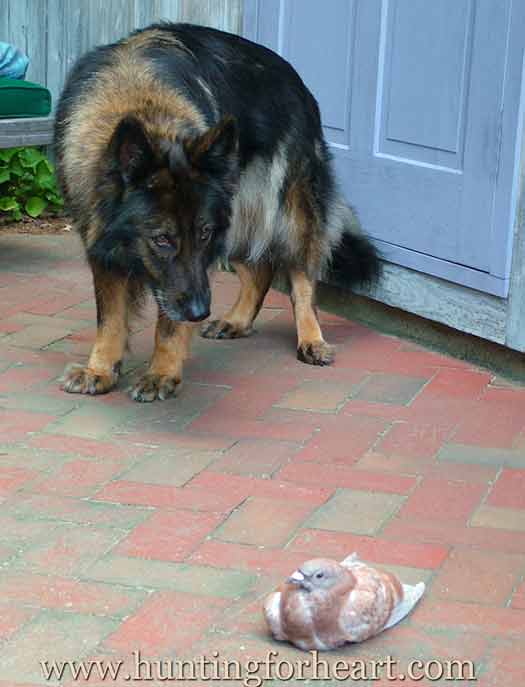 For a few days, I do this. Ena is calmer each time. The bird is clearly attracted to Ena and comes closer. After awhile, the bird approaches within four feet of Ena and settles down on the warm bricks. He grooms himself unconcernedly as Ena calmly regards him, then fluffs out his feathers, blissfully relaxed with eyes closed. The two creatures, predator and prey - are aligned in perfect harmony.

Inspired by the beauty of the Red Check Racer, I do a little online research on racing homing pigeons. One website has a list of racing lofts. I learn that the band around his leg would have a code that indicates which racing loft he is from. Using the code, I would be able to find this bird's owner among those listed on the website.

One day, when bird is in the dog crate, I gently take him out. Removing the band, I write down the code inside it and place it back on his leg. I find that the owner lives in mid-Massachusetts. From the list of racing lofts, I obtain the phone number and call. I leave a message describing the pigeon and invite the owner to come out to get him if they want.

After leaving two or three messages, I get no response. I figure maybe because the bird got lost, the owner of the racing loft does not feel this bird should be part of his flock. Of course that is an assumption, because I don't really know.

Around this time, the pigeon starts disappearing, sometimes for hours or even a whole day. We never know when we will walk out on the terrace and find him gone. Just when we think he may have left, he again reappears. Perhaps he is getting his bearings in an effort to return home. This is when we nickname him 'Houdini.'

There is no dramatic taking leave, as with the White Dove. One day the Red Check Racer is gone. He never comes back. 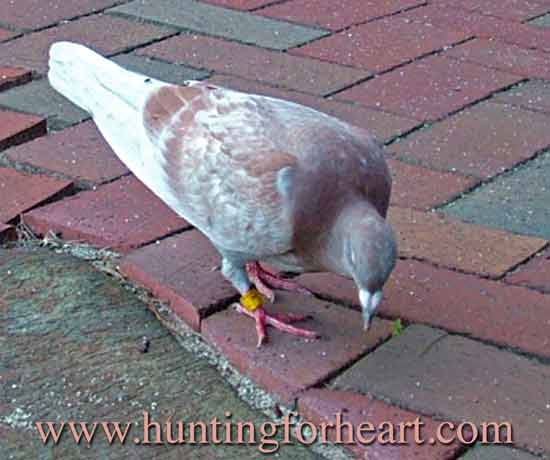 Back to Best Dog Stories