Crate training a puppy is really EASY! What are the reasons to do this? 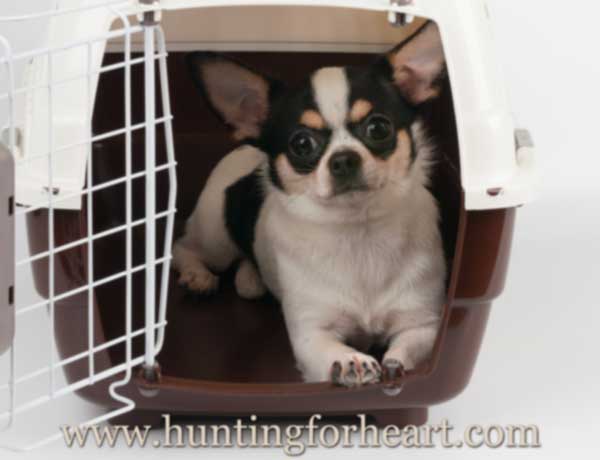 The goal is for the outdoor environment (rather than indoors) to be the stimulus for your pup to run, play and eliminate. The smell of the earth, trees, the open space and the enjoyment of moving freely should be the stimuli that encourage them to relax and eliminate.

Being out in nature is where the pup can express his drive - run, pounce on toys, etc. - all the things you don't want them doing inside your house!

Crate training a puppy gives your new companion a physical reference point to establish an easily-defined difference between your home and the outdoors. It is essential to make this process as pleasant and easy as it can be.

Too often, housetraining is made far too complex by thinking you can 'give them a little freedom in the house' before they are ready. Then you have to reprimand them, grab them to keep them from bad behavior - difficult for you and traumatic for them - a puppy only stops the undesired behavior because they were frightened by the owner.

Providing their own private den in the house gives your pup an easy-to-understand physical reference point for the contrast between indoors and outdoors. Indoors = rest and relaxation; outdoors = doing all the things they love to do. You can relax while the crate and pup's growing temperament do the work.

ALSO, if you have adopted a mature dog, it is best to use the 'indoor den' option. Commonly, rescue dogs have issues. How often have you seen adoption suggestions such as; 'should be the only pet in household,' 'not available to homes with young children,' 'is not good with cats,' and especially - 'needs some work on housetraining,' etc.? Getting your mature rescue dog accustomed to their 'den' can come in handy to keep your possessions safe, or if a relative visits with young children and your new pet is not good with kids.

My mentor, Kevin Behan would say, 'Temperament trains the dog.' This means that just by the process of a pup growing into a dog, the natural process of physical and emotional development does a lot of the work for you.

A LOT of the process of crate training a puppy happens naturally - simply as a result of the maturing process. As just one example, obviously a little pup is not equipped physiologically to control their elimination. TIME is a big factor in solving that problem. Your job is to take them outside more often - even in the middle of the night at the beginning.

Time also helps solve the problem of expanding 'keeping the nest clean' to the whole house - and any indoor space. This is where the crate comes in. It provides a 'clean area' that is EASILY defined by a little pup. To try to define a whole room or even a house, as a 'clean area' is VERY difficult - if not impossible - for them AND a lot more hard work for you.

Gradually, as your pup's temperament matures, their horizons expand. With proper care on your part, after awhile, they can expand their perception of 'nest' to include your whole house. They also likely will view other people's homes as 'nests' where it is not natural to eliminate.

When channeling your pup's drive (energy) is done right, they will gradually lose interest in your possessions. Prey drive (desire to chase, pounce on and bite) goes from general to specific as dogs mature. Pups will chase almost anything that moves - a leaf, your ankles, a flapping scarf and so on. As you engage your youngster with a bite toy and other training outdoors, when done properly, your dog's interest in destroying your possessions (your couch cushions etc.) will gradually diminish.

With a little skill on your part, biting the toy can become more important than the neighbor's dog, a runner or cyclist, a squirrel and so on. Please - keep in mind that this is a gradual process! It takes over 1 year for a toy dog to mature, up to 4 years for larger dogs.

You can't rush mother nature - the schedule you have in your head will only keep you from FEELING what is good for you and your dog at any moment in time.

As a mentor of mine once said, 'Let a puppy be a puppy.'

You may ask, 'But what is the point of having a pup if they can't be with me?' 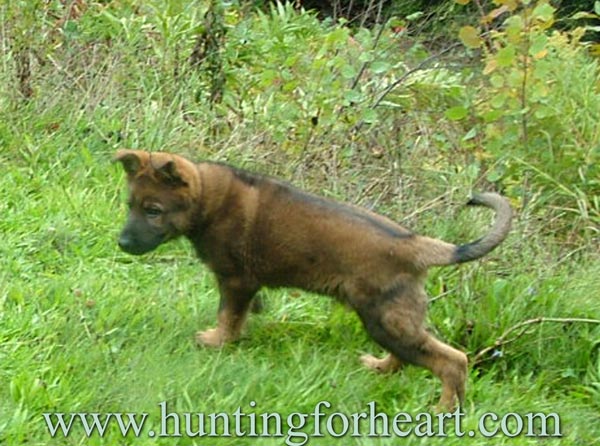 PHOTO ABOVE: Simple solution; when you spend more time with them outdoors, the bond between you and your pup will grow beautifully!

They need to take plenty of naps as they are growing - that's the 'in the crate' part.

When you are diligent about crate training a puppy, it is easier and also better for your relationship.

Crate training a puppy is easiest when you create a clear demarcation between indoors and outdoors. Indoors is a place to relax, hang out and sleep. Outdoors is the place to pee, poop, run, jump, play, bite toys and chase leaves. As your pup grows older, you will engage him with toys, games of hide-and-seek (with you always 'IT"), walks, etc. As they mature, those games become the basis for obedience. When Natural Dog Training principles are followed in the activities you share, it will lead to the greatest possible emotional rapport between you and your dog.

At the beginning, all indoor time should be spent in the crate. Why? Because your pup will not be able to chew your couch, pull towels off the rack, pee, poop or eat something that will do harm.

Most importantly, you will not need to reprimand, interrupt their natural flow of energy and movement, or get angry at them.

Crate Training a Puppy:Why Not Just
Correct them When Indoors?

Correcting a pup before his energy is fully channeled leads to any number of undesireable behaviors. Running away, avoiding the owner, clinging and dependence, out of control barking, aggression, house soiling and destructiveness and more can be the result.

A baby pup is too young to process 'corrections.' Reprimanding a little pup in any way creates an emotional divide between you, leading to some form of avoidance on the part of the pup. This is because they only stop a pleasureable behavior such as chewing a rug because they were frightened out of it. Very few owners recognize that even 'kinder, gentler' reprimands frighten the pup. If a correction succeeds in stopping the behavior, it assuredly has frightened the youngster. Because the owner frightened them, they perceive the owner as the problem - as a negative - in that moment.

You, as well as the pup, need to see a correction NOT as a punishment, but as a STIMULUS to the dog to reorient and connect more fully with their person. If you harbor the idea that punishment is needed to teach a dog to obey, that certain behavior needs to be crushed, be prepared to take the consequences. The stress that builds up in a dog from such treatment, however 'kind and gentle' you might think it, WILL cause behavior problems of one sort or another. At the very least, you may wonder why your dog is not as calm, confident and cooperative as you had originally envisioned.

Crate training a puppy is an important ingredient in laying the groundwork for an exceptional relationship!