The white dog was so beautiful, he stopped me in my tracks.

It was forty years ago, but that day lives in me forever. 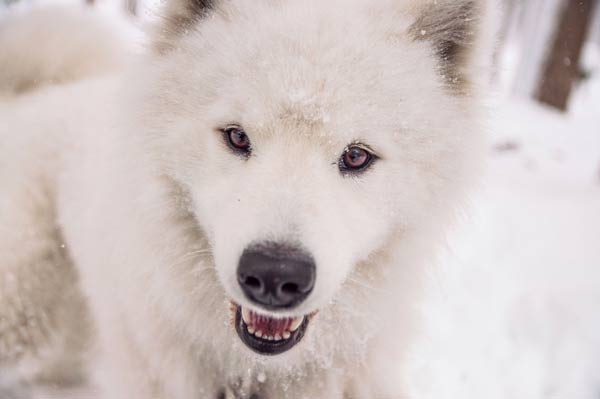 Back then, I spent several hours three to four times a week walking and befriending dogs at Hi-Tor Animal Care Center in Pomona New York. Every visit, after I parked my car, I would go straight to the outdoor kennels to see who was there and find my first walking companion of the day.

On this particular Spring day, as I approached, a snow-white dog stood still, regarding me intently. He looked to be a Samoyed-German Shepherd mix. His coat was lush and lovely, just waiting for someone to immerse their fingers in silken softness.

But as I got closer - in a split second, this paragon of canine beauty went ballistic in a non-stop fit of rage that sent my heartbeat spiralling out of control. He ferociously clawed the chain link of the kennel, glaring at me and roaring-barking-yelling all at the same time.
_______________________________

Little did I know that this pyrotechnic display of rage had at its base attraction and desire to connect which had been repressed by owner mishandling, and stored as an explosive charge needing release.

At that moment I was the releaser. With the right means, that would have been the first step toward real healing for this dog.

Because his rage was at the surface, yearning to be received and transformed!

Clearly, there was no way that a volunteer like me could contemplate taking the white dog for a stroll.

I headed to the front office to check in with the shelter manager, a very kindly red-haired man named Ken Ey. I mentioned how the white dog had reacted to my approach. A grim, sad look crossed Ken's face.

"We can't take a chance on some volunteer entering his kennel," Ken sighed. "I'm going to have to put him down."

Ken went into the back room of the office and emerged with a long contraption with a stick and a pulley-like wire attached. At the end of the stick was the syringe.

I don't know why, but I followed him out to the kennels. Sure enough, as we approached, the white dog erupted in a fit of rage. Ken slid the syringe end of the stick through the chain link of the kennel, quickly inserted the needle into the white dog's hind leg and pulled the wire.

In a moment, the white dog began to melt. It was as though I could see his life energy draining out of him like water onto the cold concrete of the kennel.

The white dog looked straight into my eyes those last few seconds of his life.

I'll never forget what I saw - a little puppy - totally innocent, just wanting to be loved by someone who could accept his true nature.

Afterward that day, I went on and found some dogs to spend time and love with. I thought I had moved on from that moment.

That evening, the death of the white dog surfaced in my mind and heart, accompanied by tears that would not stop.

The same happens as I write this - buckets of tears forty years later for the sad, hurt little puppy that lived beneath the rage of the white dog.

The White Dog is Ubiquitous

The white dog is ubiqutous - which means you can find him everywhere.

How many of him are out there - creatures deemed 'vicious' by well-intentioned ignorant owners, trainers and others who work with dogs?

Legions of them - the most social and cooperative creatures on earth...misunderstood - often by people with good intentions, doomed to a nightmarish existence, then killed!

The white dog - how do so many get set on the same doomed path as him? Below is a brief list; I could write at great length about all of these (maybe I should - - some links in the list to relevant articles already posted):

- Letting pup have the run of the house and 'teaching' him by constantly inhibiting him / scaring him out of just doing what puppies naturally do (if he stops the behavior, you have frightened him).  Actually, I have written about this HERE and HERE

- Letting the kids run after, grab her, push their faces into hers, scream, and dress her up in doll clothes. From the moment a pup is brought home, most owners don't have a clue how to ensure a harmonious relationship between dogs and kids.

- Letting the vet tech put pup in an arm lock for procedures (there's a much better way).

- Taking the pup to 'puppy kindergarten' classes and other such needless 'socialization / training' scenarios, including 'training' classes for older dogs. A chapter from my book gives you a new look at puppy kindergarten classes.

- Taking the pup everywhere - into crowded urban setings / shopping centers, etc. to 'socialize' i.e. make them shut down emotionally around people. Some conventional advice tells people to 'introduce their new puppy to 100 different people every week' (puppies can count - who would have thought)? Charts and schedules for puppy training abound.

- Taking pup to 'dog parks' and letting larger / older dogs 'discipline' them so they 'respect their elders.'

- Feeding them commercial 'dog food' and every pharmaceutical recommended to 'prevent disease' (as if pup was not stressed enough from the above, why not add poisons that assuredly will compromise their ability to function on all levels).

There's more - much more, but a brief outline will give you the idea until I expand on all of this.

What could the fate of the white dog have been if I had known Kevin back then?

He was a Samoyed - German Shepherd cross. The Samoyed breed is known for its cheerful acceptance of just about everybody and love of physical contact. The German Shepherd is about THE most emotionally adaptable breed on the planet.

What could have happened to cause the white dog to accumulate so much rage??

I head to the front office to check in with the shelter manager, a very kindly red-haired man named Ken Ey. I mention how the white dog had reacted to my approach. A grim, sad look crosses Ken's face.

"We can't take a chance on some volunteer entering his kennel," Ken sighs. "I'm going to have to put him down."

"Wait! Let me call my trainer, Kevin Behan. He would love to work with this dog and help him heal. Kevin will then find him a good home - why kill him when he could become a beloved companion to someone? You could just put a big sign on his kennel and a padlock to warn volunteers not to walk him."

"Alright, Ellen - I'll keep him here a couple of days to give your trainer a chance to come and take him."

Next day, Kevin arrives in his truck, equipped with a large kennel crate in the cab, a pouch full of food around his waist, and wearing leather pants in case of a bite.

He approaches the white dog in the kennel. Like the opening scene in 'Jurassic Park,' the animal in the cage roars, shrieks and savages the chain link walls.

"Wow," Kevin says, smiling and chuckling, "He's got plenty of energy. This is really good - it's right out on the surface - it won't be hard to work with this guy."

Opening the door of the kennel, Kevin quickly loops a lead around the white dog's neck and lifts it firmly enough to keep from being bitten as the dog thrashes about with bared teeth.

They approach the open door at the rear of the cab where the crate is located. Kevin tosses some food into the crate. He lifts the lead, at the same time supporting the dog's hindquarters, maneuvers him into the crate and closes the door.

"Hey, El," Kevin calls to me, "In a couple weeks when you are up in Vermont for a session, you can help me work with him. He will be ready for some contact with new people by then." 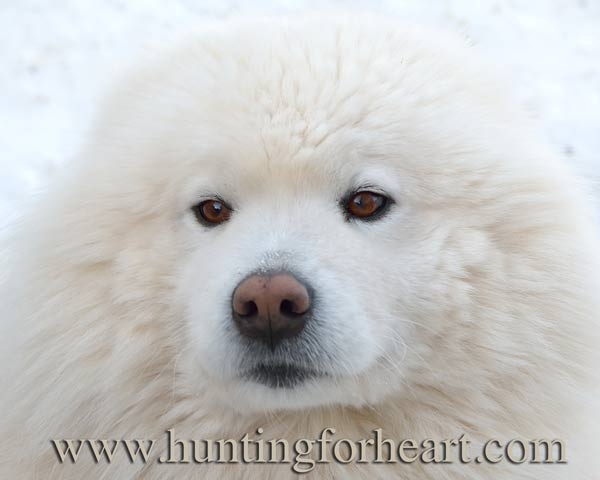 The white dog, so beautiful, so pure of heart - would not have had to die....